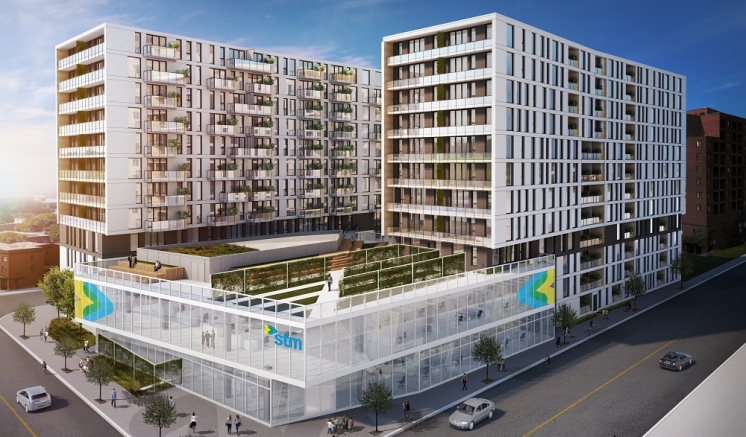 The Ville de Montréal’s Executive Committee has given a green light to the Frontenac real estate complex project submitted jointly by two paramunicipal corporations, namely the Société de transport de Montréal (STM) via its business subsidiary, Transgesco, and the Société d’habitation et de développement de Montréal (SHDM). The complex will be built on a 54,200-square-foot lot owned by the STM, close to the Frontenac métro station in the Ville-Marie borough. The project features the construction of 298 housing units, including 60 social housing units and 109 affordable, Accès Condos accredited condominiums, along with 25,700 square feet of office space to meet the STM’s needs.

Valérie Plante, Mayor of Montréal: “This project shows how we can call on the combined strengths of our paramunicipal corporations to deploy exemplary projects that meet Montrealers’ needs. As a property owner, the STM wants to develop or optimize its assets beyond its own needs. By joining with the SHDM, it taps into the latter’s expertise in real estate development in areas needing consolidation. Together, the STM and SHDM have designed a project aligned with the development vision for the neighbourhood, expanding the residential offering in a sector in high demand and integrating diversity into their project by proposing 169 social and affordable housing units. In addition, they are doing all this by drawing on the proximity of the public transit system, a key aspect of the overall project.”

Philippe Schnobb, Chairman of the STM Board of Directors: “The STM is especially proud of this project, which is a first step in developing its real estate assets. Prepared in partnership with the SHDM, the project contributes to revitalization of the Sainte-Marie neighbourhood and enhancement of the housing stock, in line with the STM’s sustainable development vision, greater accessibility of public transit and elimination of a heat island. It’s a positive initiative in a number of ways, and we hope to repeat it.”

Nancy Shoiry, Executive Director of the SHDM: “The SHDM’s expertise in responsible property investment takes on its full meaning with this ambitious project, which is an innovative response to the objectives of the Ville de Montréal and the STM with regard to housing, urban planning and sustainable mobility. By combining our know-how with that of our partners to develop a winning business model for all involved, the SHDM meets the needs of Montréal families in terms of housing and access to home ownership, in addition to significantly exceeding the Ville de Montréal’s targets by integrating 57% affordable and social housing.”

Frontenac real estate complex: an ambitious mixed-use residential project
The project involves the construction of a mixed-use real estate project located next to the Frontenac métro station and Maison de la Culture Frontenac, on a 54,200-square-foot site bordered by Du Havre, La Fontaine and Frontenac streets (Ville-Marie borough). The location means that the site is appropriate for a densification project based on transit-oriented development (TOD) principles, involving the creation of residential or commercial areas that encourage the use of public transit.

The STM decided in 2015 to develop this real estate asset, which is currently a parking lot, and invited the SHDM to join with it in creating a project that meets its needs and integrates the Ville de Montréal’s priorities for this sector undergoing revitalization. The Coop du Havre technical resource group subsequently joined the partnership, taking charge of development of social housing units as part of the AccèsLogis program.

The architectural design, signed Lemay, provides for the construction of 298 housing units, including 60 social housing units intended mainly for families as part of the AccèsLogis program; 109 affordable, Accès Condos accredited units, 58% of them with two or more bedrooms; 129 private units; and 25,700 square feet of office space for the STM. The project also includes underground parking for 213 cars and 175 bike stalls. It will be built by developer Cosoltec Inc. Construction should get under way in 2019, with delivery of the project in 2021.

About the STM
The STM develops and operates an integrated bus and métro system, as well as a paratransit service, for the benefit of its customers. The métro system comprises four lines serving 68 stations, with 71 km of tunnels, and the bus system covers the island of Montréal, an operating area of 500 square kilometres. The STM provided 416.2 million passenger rides in 2016, which translates into some 1.4 million rides per day. It accounts for over 80% of all public transportation in the Montréal area, representing more than 70% of all public transit use in Québec. To find out more, go to www.stm.info.