In a fire station repurposed into a centre for history, Montréal’s heritage is taking root

In a fire station repurposed into a centre for history, Montréal’s heritage is taking root 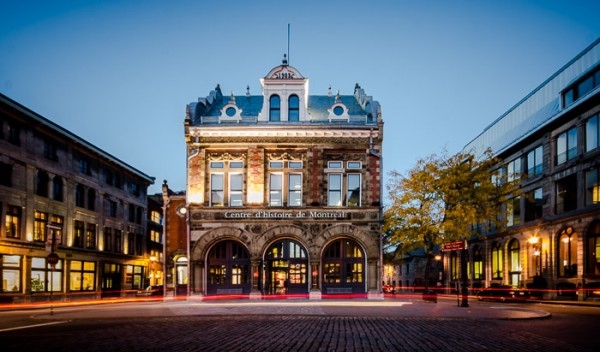 On the occasion of the Patrimoine en fête event, which will take place on Saturday, May 26, 2018, at Place Simon-Valois in the Mercier-Hochelaga-Maisonneuve borough, the SHDM shares the history of a landmark heritage building in Montréal: the 335, place d’Youville.

The Centre d’histoire de Montréal (CHM) is located at 335 place d’Youville in Old Montréal in a building with remarkable architecture dating from the early 20th century. Housing a fire station during the first part of its life, this building was converted in the early ’80s to accommodate this museum dedicated to the history of Montréal and the city’s heritage. The Société immobilière du patrimoine architectural de Montréal (SIMPA), ancestor of the SHDM, steered this conversion project in 1981.

The adoption of the Cultural Property Act in 1972 and the Agreement on Old Montréal and Montréal Heritage (MAC Agreement) in 1979 laid the foundation for the partnership between the City and the Ministry to rehabilitate the historic district of Montréal. SIMPA then became the bearer of the common will of the two partners and carried out many projects to consolidate the activities in Old Montréal, boost its economy and promote the residential function. “Where architecture, real estate and urban planning are concerned, Old Montréal was not in the state we know today. The ’80s and the ’90s were a turning point for the district,” explains Patrick Pretty, Project Coordinator at the SHDM Property Management Direction.

The Chaussegros-de-Léry complex, the former Dalhousie Train Station, the Faubourg Québec and the World Trade Center Montréal are examples of SHDM projects in Old Montréal. The recycling of the former fire station into a museum on Place d’Youville is also a remarkable achievement. Indeed, in addition to being a rehabilitation project, the function reserved for it highlights the history of Montréal. “In 2001, our expertise was used again to redesign the exhibition spaces that were more than 10 years old. The goal was to maximize visitor traffic and offer a renewed vision of Montréal’s history. After a year of major work, enabled by a budget of $2.2 million, the new CHM presents a permanent exhibition and has a new multi-purpose room for temporary thematic exhibitions. Montréal’s heritage is rooted even more in this place,” explains Patrick Pretty.

Designed by architects Joseph Perrault and Simon Lesage in 1903 and 1904, the headquarters of the Montréal Fire Department present a Flemish style, something unusual in the architecture of Montréal at the time. The architecture includes buff-coloured cut stone, red brick, an attic roof with a skylight, and a square tower with a gabled roof. Firefighters settled there in 1904 with horses and steam pumps. In 1908, the fire hall became a neighbourhood fire station, and the horses were replaced by motor vehicles. The station was disused as of 1972 and this, until its rehabilitation to accommodate the CHM.

While the SHDM celebrates its 30th anniversary in 2018, it is good to remember that it is the result of the merger of different paramunicipal societies in recent decades. Knowing how it evolved leads us to better appreciate the relevance of its mission and its past and current interventions, some of which aim at the preservation and promotion of our built heritage.