Through the winding paths of life: Taking root in a neighbourhood

Through the winding paths of life: Taking root in a neighbourhood 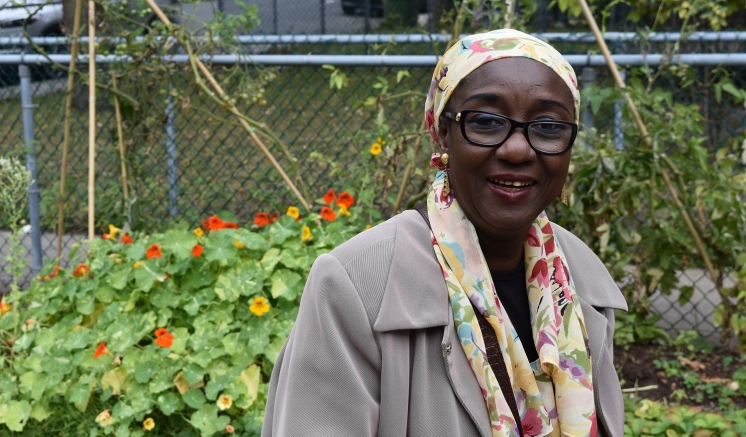 The SHDM community includes more than 4,700 tenants. We share here a testimony of one of its members who is a tenant in a building managed for the SHDM by the Société de développement d’habitation communautaire (SODHAC). She shares her life story and talks about her relationship with the Côte-des-Neiges neighbourhood, in which SHDM owns many affordable rental units. Neither community housing, nor luxury housing, SHDM’s rental properties meet the housing needs of more than 8,000 Montrealers and contribute to the diversity and vitality of our neighbourhoods.

Madjiguène lives with two of her children aged 21 and 25 in the Côte-des-Neiges-Notre-Dame-de-Grâce borough (CDN-NDG). “I have lived here for almost 20 years,” she explains. We met her during a horticulture workshop offered by the SHDM to its tenants and hosted by Sentier Urbain just a few steps from her apartment, Madjiguène told us her life story, which brings to light her sense of belonging to this neighbourhood that has seen her children grow and spread their wings.

Originally from Senegal, she arrived in Montréal in 1994. “I got married in Dakar. My husband came to Montréal first with our oldest child to do his Ph.D. in sports psychology. I joined him about ten years later with our two youngest and our last son was born here. I have two daughters and two sons, now aged 21 to 39,” she says. “We first settled in this neighbourhood a few blocks from here, and then, my husband wanting to live in something bigger, we moved to the outskirts of Montréal. It only lasted a few months because my husband died of a heart attack. As a result of this event, I decided to return to Côte-des-Neiges because it was a familiar environment in which I felt at ease. In 1998, she settled in a SHDM rental housing unit and still lives there nearly twenty years later.

Though fond of her neighbourhood, Madjiguène also enjoys her country of origin on a seasonal basis. “For several years now, I have been going to Senegal for several months to avoid the winter in Québec,” she says with a smile as she calmly prepares to leave her grown-up children in Montréal in a few weeks, the youngest of whom is still studying and lives at home. “My whole family is in Dakar, my mother, my brothers, sisters, uncles and aunts. I am much attached to Senegal, even though I am proud to be a Canadian and love my country of adoption,” she continues. Indeed, Madjiguène’s four children live in Québec, in Montréal, except for her eldest who settled in Joliette. The latter is the father of 5-year-old twins. “They have so much energy at that age!” says Madjiguène, who is definitely a resilient woman with a zest for life.

The life of expatriates and immigrants is a fundamental reality for the people of Montréal, especially in the CDN-NDG borough. Indeed, nearly half of the residents of this borough are immigrants and many of its neighbourhoods are known as a host environment for newcomers. “I like this area because we are really in the city. There are different people, different cultures and different lifestyles. It is a very open neighbourhood. There are also the metro, universities, schools, shops,” says Madjiguène. “When my children were little, the neighbourhood was also very lively and family-oriented. I remember, for example, that children came and went from apartment to apartment, visiting each other. A friend of my daughter also came every morning to get my daughter so they could walk to school together,” she adds. Several community organizations are located in the borough to support the highly represented families and immigrants in the area. “The Senegalese community is quite important here and I liked to get involved through different associations. Also, when my children were younger, we attended Le Baobab familial, which is an organization that welcomes families and offers help with homework, daycare and various community activities. The founder, Marie-Rosaire Kalanga, had her hair braided by my daughter who was doing this to earn pocket money!” remembers Madjiguène.

On this International Women’s Day, let us highlight not only the courage of all these single mothers, but also that of all those immigrant women who get involved in their Montréal neighbourhood because they feel at home there.

Our thanks to Madjiguène for her kindheartedness and for agreeing to give this testimony.