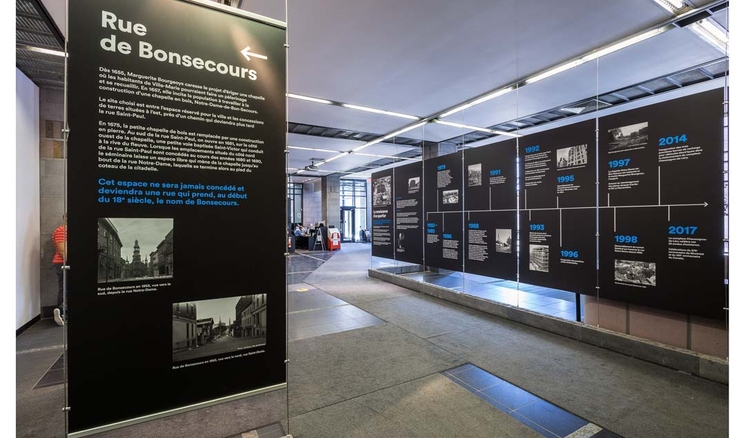 On the occasion of the 25th anniversary of the Chaussegros-de-Léry Complex, a legacy of Montréal’s 350th anniversary, the Société d’habitation et de développement de Montréal (SHDM) presents an exhibition that retraces the history of this building, whose construction has freed up space for what has become the Place de la Dauversière as well as the Champ-de-Mars, in addition to enabling the opening the Marché Bonsecours to the public. It is also the occasion to honour the memory of Gaspard Chaussegros-de-Léry who died 261 years ago today, March 23, 1756.

The exhibition “Chaussegros-de-Léry - 1992-2017” is open to the public free of charge in the lobby of 303 rue Notre-Dame Street est. A video composed of archive images is also available.

“The Chaussegros-de-Léry complex is so much a part of the landscape today that we forget the role it played in the Old Montréal revitalization project, offering a solution to several specific problems of the neighbourhood and the municipal administration,” said Manon Gauthier, a member of the Ville de Montréal Executive Committee, responsible for culture, heritage, design, Space for Life and the status of women. “Underlining this contribution gives us an additional perspective on the future impact of the projects for the 375th anniversary of Montréal, which we will launch throughout 2017. It also allows us to honour the memory of Gaspard Chaussegros-de-Léry who designed the plans and supervised the construction of the fortifications of Montréal between 1717 and 1744.”

Nancy Shoiry, Managing Director of the SHDM added: “As the owners of the Chaussegros-de-Léry Complex, we are proud to celebrate the anniversary of this building and its direct role in the transformation of Old Montréal. It is an excellent example of the SHDM’s contribution as a prime contractor for structuring projects, carrying out the vision of the Ville de Montréal and revitalizing key sectors for the economic and social development of Montréal. ”

Regarding the Chaussegros-de-Léry Complex
Located at the corner of Notre-Dame and Gosford streets, the Chaussegros-de-Léry Complex has an underground parking of more than 1,000 spaces which replaced the huge outdoor parking spaces that surrounded City Hall until the 1990s, and which have been transformed into public squares and green spaces, with the Place de la Dauversière to the south and the Champ-de-Mars to the north, in addition to the land on which the complex was built, to the east. Above ground, the complex comprises two seven-storey buildings, the first of which is an institutional building that houses various administrative services of the Ville de Montréal while the second one houses condominiums and a number of businesses.