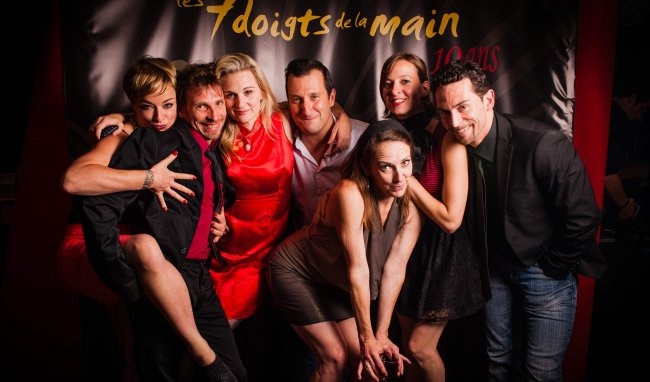 Montréal, Thursday, August 15th, 2013 - The Ville de Montréal Executive Committee has authorized that the recommendation of the Board of Directors of the Société d’habitation et de développement de Montréal (SHDM) to proceed with the sale of the building that formerly housed the Musée Juste pour rire to the circus company Les 7 doigts de la main be submitted for approval by the City Council.

The Ville de Montréal and the SHDM have agreed to share the investment necessary for this building to conserve its cultural vocation and contribute to enriching the animation of the Quartier des spectacles. The terms of this transaction, which will be concluded in the coming months, confirms the important level of support for this non-profit organization, by both the City and the SHDM, in its efforts to acquire a permanent center for artistic creation and production in Montréal.

The building, with an estimated value of slightly more than $3 million, is to be sold at a price of $2.5 million, payable to the SHDM in 20 annual interest-free payments of $125,000. By offering such an advantageous price as well as interest-free financing, the SHDM will also contribute $1.3 million towards the project’s implementation. SHDM experts have also been involved in developing this project since the building was bought back, after the Musée Juste pour rire ceased its activities.

For its part, the Ville de Montréal will invest in the transaction with a contribution of $824,000 aimed at covering the operating and maintenance expenses of the building since September 2011.

Mrs. Élaine Ayotte, responsible for culture, architectural heritage and design at the Ville de Montréal Executive Committee, stated that “This is a critical step forward to relocate the 7 doigts de la main circus troupe in the Quartier des spectacles district. It demonstrates our commitment to promoting the circus arts. This inspiring, audacious and highly creative organization contributes to Montréal’s prestige. Its presence in a strategic area of the downtown core will enrich Montréal’s cultural hub.”

Ms. Johanne Goulet, Director general of the SHDM, adds “We are delighted to be able to contribute to the growth of our artistic community and to play our true role as a strategic agent of economic, social and cultural vitality, through our real estate expertise. The commitment of the SHDM in this project makes it possible to give new life to the city’s cultural creation and performance spaces. It is also a wonderful demonstration of our ability to facilitate the implementation of municipal policies and objectives in the field of culture.”

For M. Nassib El-Husseini, general Director of 7 doigts de la main, the acquisition of this building is a turning point for the company, which after 11 years of activity will finally be able to consolidate all its assets under one roof in Montréal. “For the first time, the company will have a permanent home, which means an end to the scattering of its various departments in the four corners of the city. It is the culmination of our dream to dispose of our own center for creation, performance and administration, and to be able to meet the growing needs of a company which has been performing around the world for more than a decade.”

The repurposing of the former Juste pour rire museum
In September 2011, a few months after the Musée Juste pour rire ceased its operations, the SHDM purchased the building that had housed the museum. The SHDM had the intention of maintaining the cultural vocation of the building, located at 2109-2111 Saint Lawrence Boulevard, in order to ensure the ongoing vitality of the Quartier des spectacles. Today, the company Les 7 doigts de la main is finalizing the financing to retrofit the building and materialize its project, thanks in large measure to $9 million in financing from the ministère de la Culture et des Communications du Québec, confirmed in 2012. According to the project’s time table, the troupe should be able to take ownership in a few months, and subsequently undertake the renovation work required to occupy and exploit the building.