Under the spell of Mrs. Lacoste, a 100 year-old tenant in one of SHDM’s Autonomie+ building 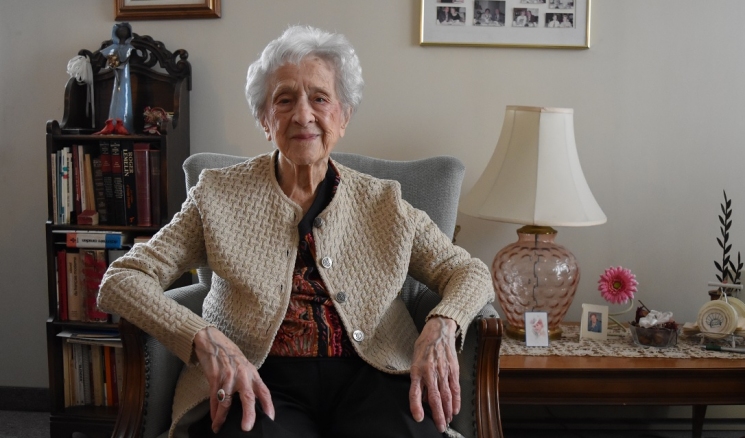 The SHDM, owner of 16 Autonomie+ rental complexes, leases 1,118 apartments for autonomous people aged 55 and over. Among our tenants, Mrs. Lacoste, who celebrated her 100th birthday last June, never ceases to amaze us with her lucidity, her humour, her charm … and her perfect autonomy!

On the fourth floor of an SHDM building, Mme Lacoste welcomed us in her 4 ½ room apartment, nicely decorated and well cared for. She has been the tenant of this property for more than 30 years, Mrs. Lacoste had originally moved in with her sister. Though her sister passed away a few years ago, Mrs. Lacoste still feels good about her home. “I’m used to living here,” she says. Born in 1916 less than two kilometres from her current place of living, Mrs. Lacoste knows this neighbourhood well.

The Autonomie+ properties were intended for autonomous people, and we asked her how she goes about maintaining such autonomy. First of all, Mrs. Lacoste is lucky to have a relative on whom she can rely. Her nephew and godson is the person who cares most about her; “He lives in Sainte-Thérèse. He comes to fetch me for appointments or to take me shopping. He sometimes takes me to the restaurant,” she explains. Mrs. Lacoste also receives biweekly in-home support services to clean the apartment. There are finally her neighbours with whom she shares activities and on whom she can count for ad hoc purchases. “Every Monday afternoon, we play games of bean bags toss in the community hall of the building. Then, several times a week, we meet at a neighbour’s place to play cards. It passes the time,” she says. “A neighbour also regularly offers me to add my requests to her shopping list when she entrusts her purchases to someone in her entourage.”

This cohesion between neighbours helps to counter isolation and promote the vitality of living environments for the elderly. These are the objectives of the SHDM Autonomie+ complexes and it is gratifying to note that they take their full meaning in testimonies such as that of Mrs. Lacoste.

Mrs. Lacoste still cooks and likes to prepare a good filet mignon. “I also, from time to time, buy ready-made meals,” she says. Aware that her autonomy and her health remain fragile, she anticipates with serenity and simplicity the wish of her godson to find a residence with care when it will become necessary. There are many family pictures in her tastefully furnished living room. The frame hanging behind her chair is a montage of photographs taken during the celebration of her 80th birthday at which several of her nine siblings were present. Today, being the only survivor of her generation, the moments she cherishes most are when her nephews or nieces invite her in their families.

Her advice to young people or perhaps the secret of her longevity would be “one day at a time.” Thank you, Mrs. Lacoste for agreeing to meet with us and for delivering this inspiring testimony.